Graph mining with a faulty oracle

Pythia was a powerful and respected woman in Ancient Greece. She was the high priestess of the Temple of Apollo at Delphi. I was surprised to read in the Wikipedia article that the name Pythia is derived from the verb πύθειν (púthein) which means “to rot”; I find this to be unlikely. An etymology that sounds more likely is that the root is the verb “πυνθάνομαι” which means to get informed.  Pythia served as the Oracle, namely she was making predictions but some of these predictions were notoriously ambiguous. An example: once a man went to ask whether his wife would give birth to a boy or a girl. Pythia replied “άρρεν ου θήλυ” or in English “male not female”. This is an ambiguous answer, depending on where one places the comma, i.e., “male not, female” vs “male, not female”. Oracles are noisy due to the inherent uncertainty in predicting the future. Pythia was definitely doing her best in order to claim that her predictions were correct no matter the future outcome.

Clustering with a faulty oracle 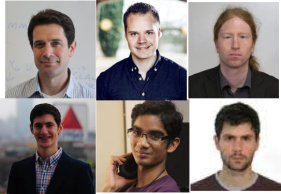 In a joint work with Michael, Kasper, Jarek, Ben, Preetum and Vasilis we modeled this task as a noisy correlation clustering problem.  Specifically, we assume there are two clusters of nodes that are unknown to us. Inspired by the balance theory, we assume that interactions within clusters are positive, and across negative. We can choose any pair of nodes once to query and get a noisy answer on whether they belong to the same cluster or not. Let’s assume that we get the correct answer with probability

. The noise is iid in the queries we perform. The question we want to answer is whether we can recover the two clusters with high probability, and how many queries do we need to achieve our goal?

We provide two algorithms for this problem. The first algorithm is called Pythia2Truth and has the following properties stated as the next theorem .

Theorem: There exists an algorithm that runs in

that returns both clusters of

While the algorithm is simple to describe and implement, it improves the state-of-the-art results of a last year’s NIPS paper [3]. Essentially, for all except tiny delta, it achieves exact recovery with

queries and in polynomial time. The theoretical analysis relies on standard Chernoff bounds. Our second algorithm theoretically is more involved and achieves sub-optimal results, but nonetheless we believe it is of independent interest. The second algorithm performs queries uniformly at random. A key benefit of this is that the underlying graph is a random binomial graph for which we know a lot of things. Then in order to predict the unknown sign between nodes

it creates a  special subgraph between

that creates sufficiently many almost-edge-disjoint paths between the two nodes. Each path casts a vote on the sign between

,  by taking the product of the signs of the edges along that path. Intuitively we choose the sign between

to be the majority vote among the path votes. The main result is stated as the following theorem.

. There exists a polynomial time algorithm that performs

edge queries and recovers the clustering

whp for any bias

From an empirical point of view, we extend the framework of Leskovec-Huttenlocher-Kleinberg by adding path based features in the set of features used to train a logistic regression. We report several findings on real world datasets in our paper. We found some of them to be surprising. For instance, edge disjoint paths of length 3 between two nodes can be more informative than triads, but edge disjoint paths of length 4 or greater are not. Our addition gives significantly improved classification results for  edges with zero or small number of common neighbors. You can find the details in our paper.

Can we extend our results to the case of